The History Behind The Fat Pack 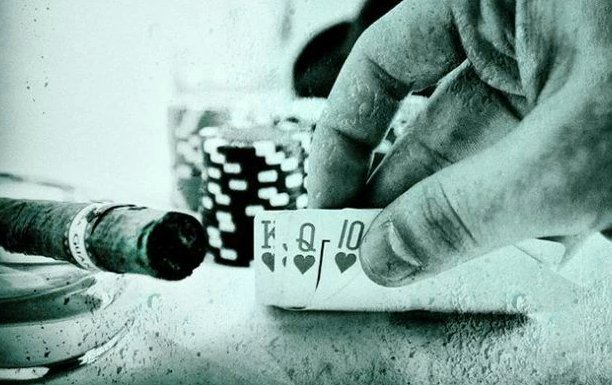 The initial idea for “The Fat Pack” was conceived back in the early-1990s, not so much out of any recognition of there being a gap in the market, but more out of a one-off necessity, at the time, to involve a group of seven, enthusiastic and willing participants, on holiday abroad, in some form of entertainment utilising a solitary pack of playing cards.

The principal consideration for this enlarged pack of cards was that it should address the immediate problem of being able to involve at least seven players. Obviously, therefore, one or two additional suits were hardly going to meet this prime requirement. But to have had an odd number of suits would have seemed awkward and irrational so, for the sake of symmetry, it appeared that the only logical alternative was to settle for four additional suits.

But why stop there? Why not go for a ten- or even twelve-suited pack of cards? A further, very important consideration was practicality. Most people can hold two packs (i.e. 104 cards) comfortably in one hand but to be able to hold the equivalent of two-and-a-half or even three packs comfortably without spilling any of them seemed to be carrying the concept too far.

Furthermore, there was the problem of what to call the new suits. It had proved difficult enough to come up with four new names, let alone six or eight, especially as it had been decided to follow the Anglo-French tradition and adhere to the existing colours and theme: (i.e. black representing symbols of war and aggression and red representing symbols of love and peace). 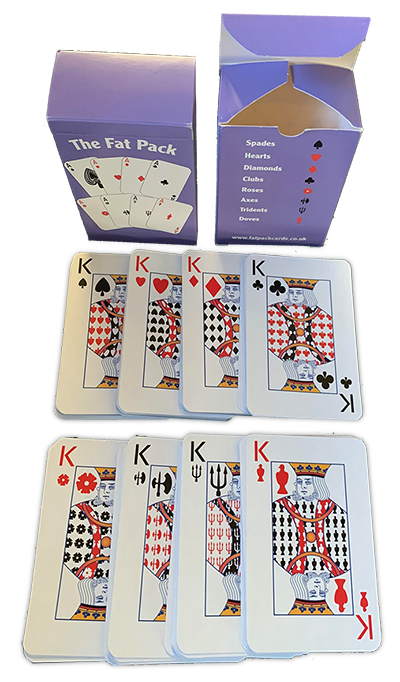 It had also taken a considerable amount of time to settle on the final designs for the new suits: Roses, Axes, Tridents & Doves. The fact that there is a certain assonance, when all eight suits are read off in sequence, is purely coincidental.

The majority of new games, involving playing cards of some description, have been designed uniquely for one specific game. This was never the intended purpose for the Fat Pack. The Fat Pack was created essentially to enable up to eight players to enjoy many of the well-established card games that, hitherto, could only be played by four players.

Nevertheless, the Fat Pack is indebted to SirTerry Pratchett, the celebrated author, whose series of Discworld novels introduced his devoted readers to “Cripple Mr Onion”, a card game which requires the players to use an eight-suited pack of cards.

Their only problem, up till now, was that the game could only be played by using two totally different types of playing cards (French/English suited and Spanish/Italian suited) with, obviously, two very different backings.

Each Fat Pack contains suits of Roses, Axes, Tridents and Doves, aside from the traditional Spades, Hearts, Diamonds and Clubs.